Built in 1912 on a bluff above the confluence of the St. Croix and Mississippi rivers, the church towers above Prescott’s downtown. Twin domed steeples make it a long recognized landmark at the head of Wisconsin’s Great River Road. 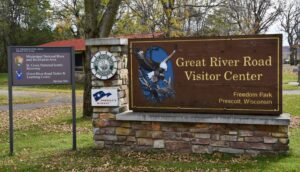 (west side of Hwy 10 just north of downtown)

Also known as the Mitchell House, this privately owned Greek Revival house was built in 1853 by early resident and gunsmith, Daniel Smith. The house served as one of Prescott’s first private schools and has been on the National Register of Historic Places since 1984. Closed to the Public.

Corner of Main Street and Hwy 10

The brick tower was completed in 2006 and houses the rebuilt 1937 Seth Thomas clock that stood in the belfry of the old Prescott High School on Elm Street. For more information, visit: www.prescottclocktower.com 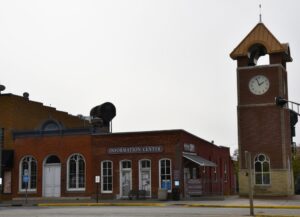 This example of Romanesque Italiante architecture was built in 1885, used as a bank until 1903, and later, from 1944 to 1991 as the Prescott City Hall. It was placed on the National Register of Historic Places in 1994 and now serves as the Welcome and Heritage Center.

Built in 1884, this section of the city’s Welcome and Heritage Center near the clock tower once housed the Pierce County Plaindealer newspaper, that later became the Prescott Journal. 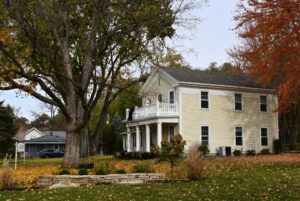 Built in 1854 by Prescott pioneer and real estate promoter, Hilton Doe, this house remained in the Doe family until 1867. It changed hands several times before Julius Knoblach bought it in 1895. The Knoblach family inhabited it until 1952. A 1994 restoration by Glenn and Carla Webster made the pages of Country Home magazine as one of the area’s best examples of Greek Revival architecture.

The oldest continuing church in Prescott, the U.C.C. was organized as a Congregational Church across the St. Croix River in Point Douglas, Minnesota in 1852. The growing congregation moved to Prescott and began construction of its first building in 1856. Problems with its locally produced brick made replacement of the building necessary by 1915. The larger structure, still standing, is made of cut limestone and brick. The art glass windows are the originals. An addition was built in 1962. 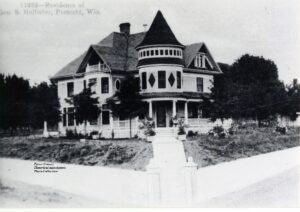 This beautiful example of Victorian architecture was built by grain dealer George Hollister in 1908. In 1952 the building was converted to apartments, then a bed and breakfast lodging. It is once again a private residence, retaining it’s hardwood floors, turrets, bays, tiled fireplace and stained glass windows. 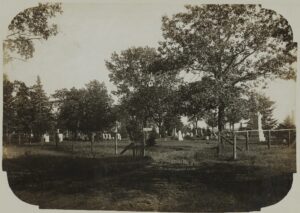 Pine Glen, in it’s lovely location on a bluff above the Mississippi River,began as a pioneer cemetery containing a “Potter’s Field” for early indigents, infants, and transients. The oldest marked burials are from the 1850s, when the deceased were re-interred from a small burial ground near the city center. The perimeter was long bordered by a stand of native White pines.

St. Joseph’s Cemetery, adjacent to Pine Glen, was incorporated in the 1860s for members of St. Joseph’s Church. The belief of which was to inter Catholics in hallowed ground. The earliest grave markers reflect this history. 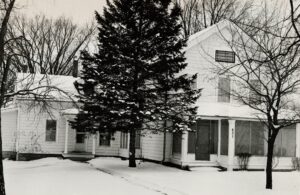 This house was built in 1858 by James Monroe Bailey, who arrived in Prescott in 1849 and dedicated his life to improving his community. It remained in the Bailey family throughout the 20th century. Ell and porches were added in the 1870s. 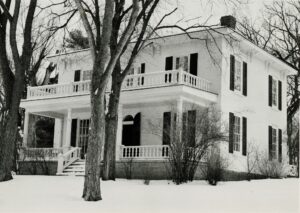 Built in 1859 by Mansergh, a Prescott farmer and real estate dealer, the Italianate-style, 17 room, white brick house once stood on a full block of land. The Mansergh name is also spelled Manser. The Pierce County Plaindealer noted in Sept. 1878, “The first party of the season was held at Mansers; 100 people attended.” The house was sold to Matt Dill in 1885 and was sold by a Dill nephew in 1945 to Helen Magee. The home became well known in the 1990s for it’s beautiful nursery business, Funkie Gardens.